Is there anything more natural in our lives than colour? Colours are among the first things every child learns.They surround us in the environment and they are closely linked to our psychology.

We choose which colour to dress in depending on our mood and the occasion. We select colours for designs in order to trigger certain emotions in the viewers. We use them symbolically on special events. In short, colours – and our feelings towards them – form a big part of our lives.

However, for societies around the world the same colours can convey different meanings.

Once you understand these differences, you’ll be able to tailor your visual messages to target audiences and make the right colour choices for international interactions.

History and local traditions have shaped the way people perceive colours because, for generations, every nation has attributed symbolic and ritual meanings to colours. Colours have always had the unique ability to evoke feelings, memories and associations in our minds.

To see how much these associations vary around the world, let’s look at some examples.

What do you think of when you look at the colour orange? If you say ‘October’, you might have Anglo-Saxon background, and if you say ‘the king’, I bet you’re Dutch. 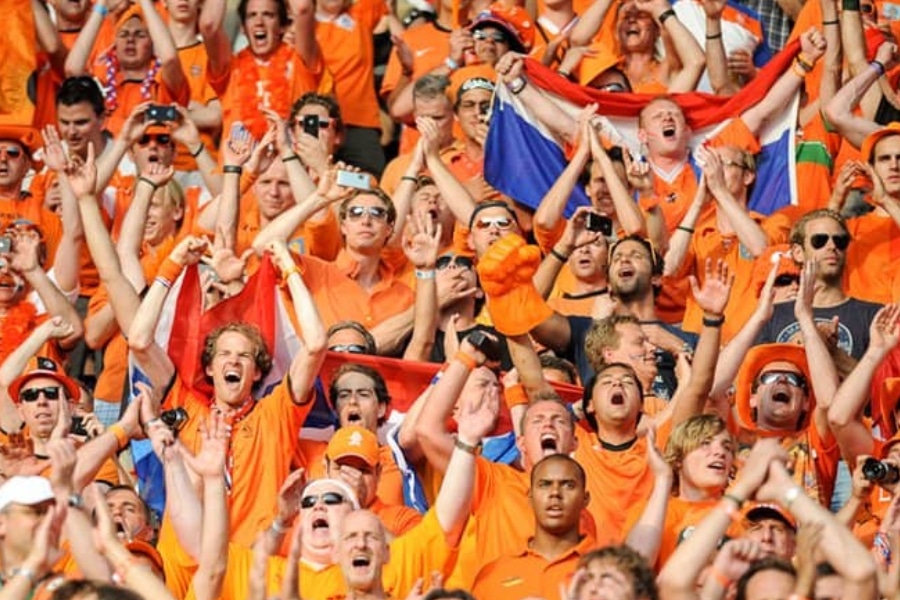 For the Dutch, orange is the national colour that raises people’s spirits on special days, sports matches for instance, when people dress in orange to support the national teams.

But the most significant day is Koningsdag (27th April), when the whole country celebrates the King’s birthday. Decorations, home interiors, clothes, hair, carnival costumes – if it can go orange, it goes orange.

Why orange? This is the colour of the royal family, The House of Orange-Nassau. The lineage of the dynasty dates back to Willem van Oranje (Willem of Orange). 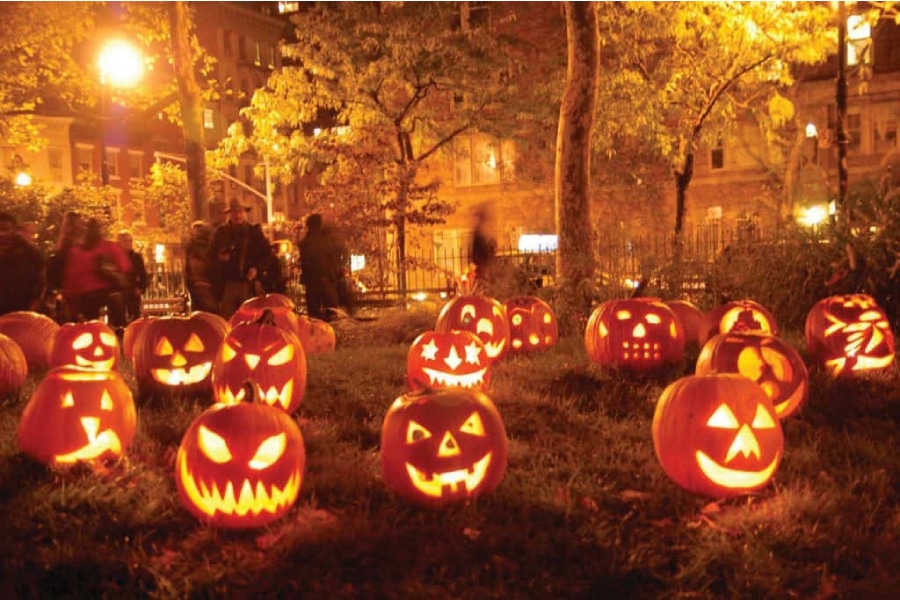 For many Anglo-Saxon and Western Christian cultures, orange is associated with autumn, falling leaves and Halloween (31st October). The main symbol of the ‘All Hallows Eve’ is a carved pumpkin Jack-o’-lantern. The name refers to Stingy Jack, the character of an Irish legend, who bargained with the Devil and was doomed to wander with a lantern made from a hollowed turnip. 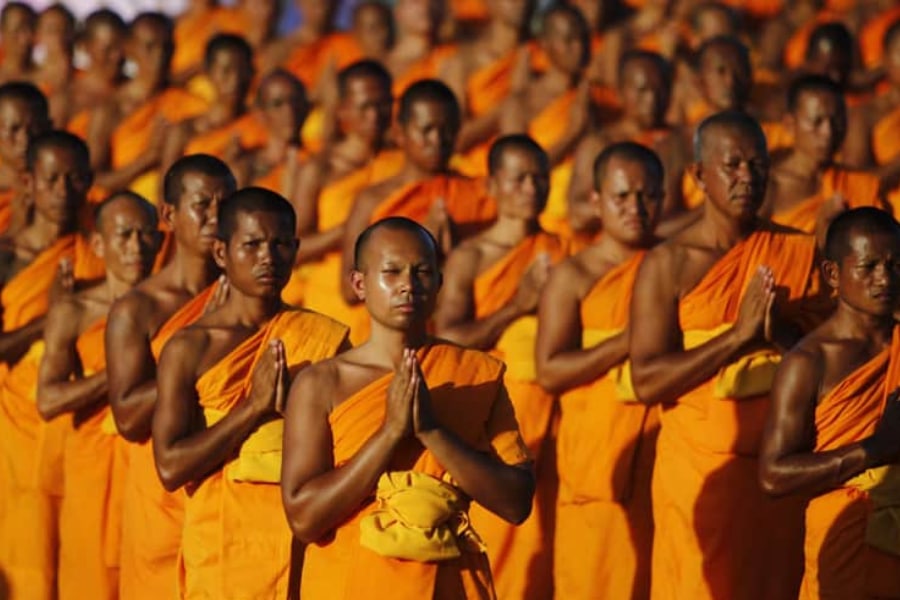 An orange robe is a signature feature of Buddhist monks.

According to historians, the colour was chosen because, back in time, saffron was the most commonly available dye. The tradition has been preserved and saffron orange is still a holy colour that symbolises peace and spiritual enlightenment. 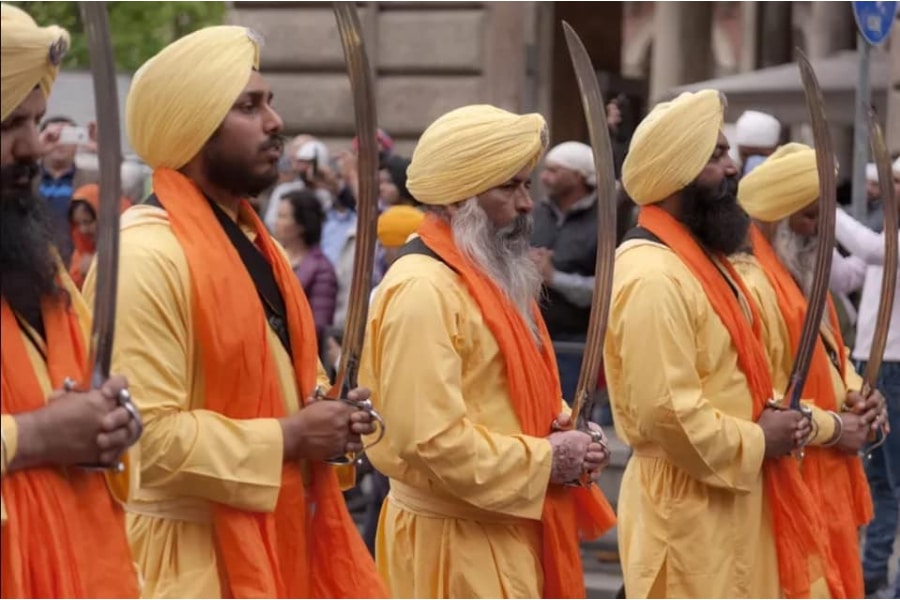 Sikhism is a comparatively young religion (yet the 5th largest in the world) which originated in India in the 15th century. Its followers are easy to recognise by their attire – traditional robes, turbans and scarves. Saffron orange is a sacred colour representing faith and connectedness and is associated with courage, bliss and philosophical wisdom.

Let’s compare these two significant days that exist in practically all cultures. These are two opposites – one celebrates life and happiness, and the other is imbued with grief, mourning and loss.

What are the traditional colour schemes for these contrasting events in different countries? 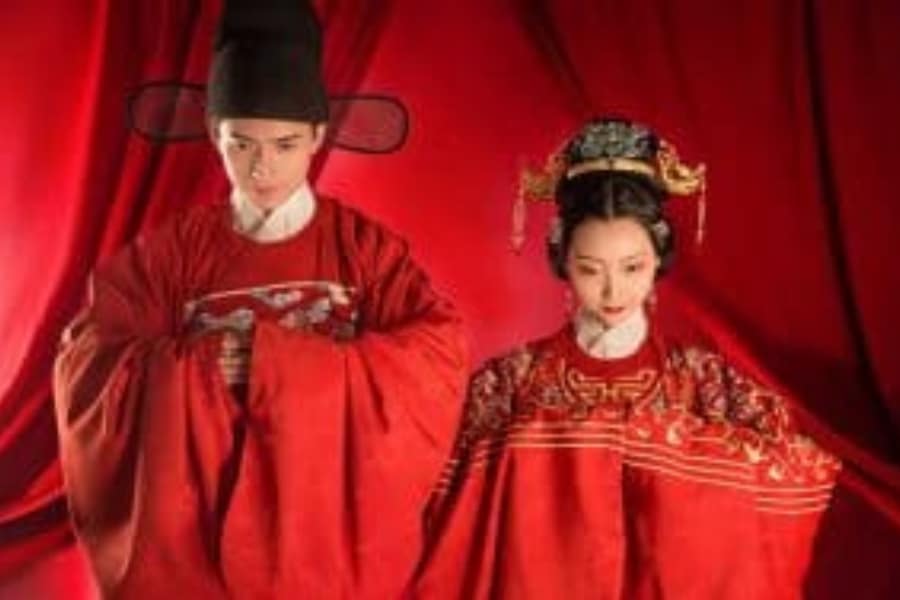 Colours have always been used to signify good luck during celebrations. On a day as significant and joyful as a wedding, the Chinese use red in abundance. This colour is believed to bring good luck and prosperity to married life for the newlyweds. 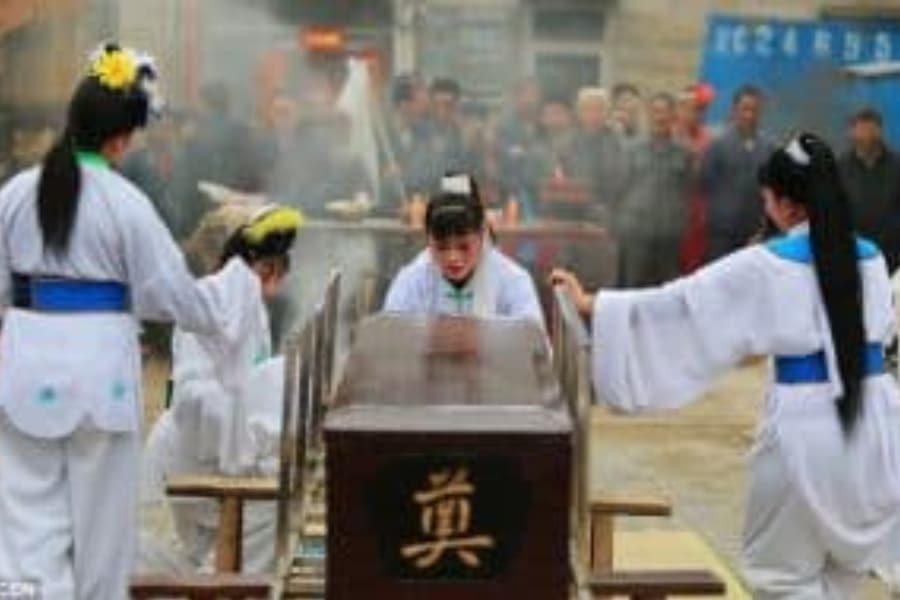 In China, white is the colour of mourning, as it symbolises the soul of the deceased. This photo shows professional mourners in China carrying out their funereal duties, dressed in white. Their presence is an important status symbol – showing the community that your funeral drew a large crowd, and their role might include performing a traditional dance, song and crying over the loss of the departed. 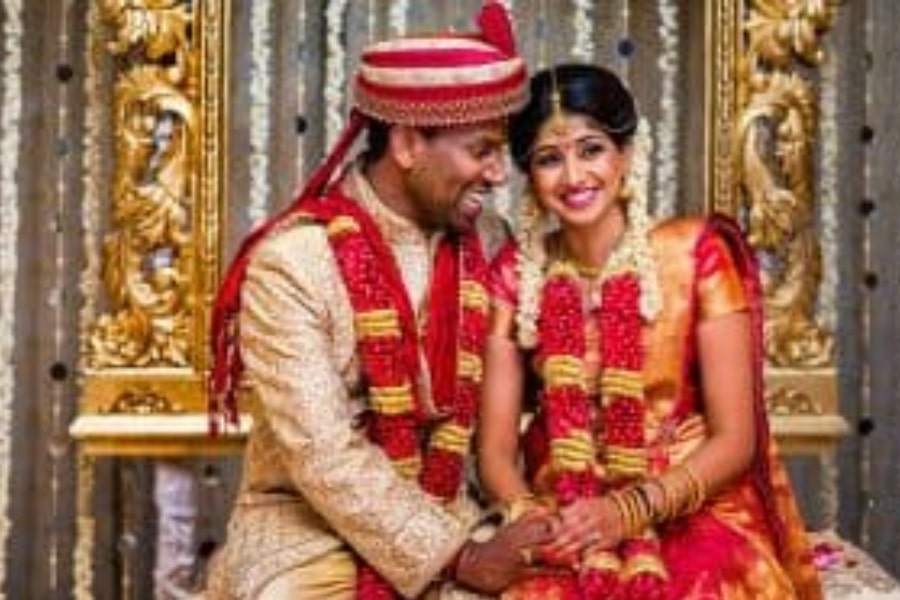 Similarly to China, in the countries where Hinduism is the dominant religion, red is the colour of choice for weddings. For Indians, it’s the symbol of the rising sun, which favours fertility and prosperity in the family. 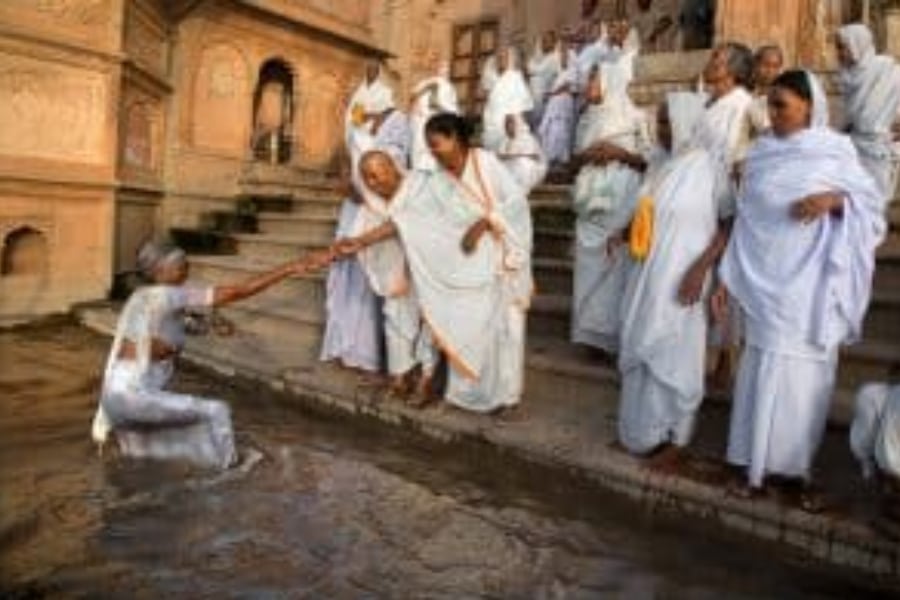 In India, white is also the colour of mourning and it refers to the purity of the soul. This photo shows widows in traditional attire during a grieving ritual for their husbands. 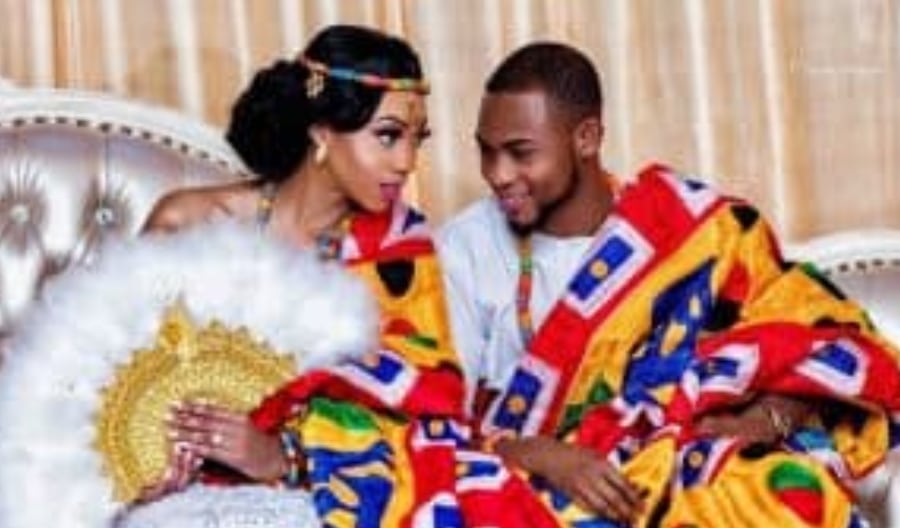 In Ghana, weddings feature the whole spectrum of colours. Every bride and groom wears outfits dyed with their own unique pattern and colour combination. 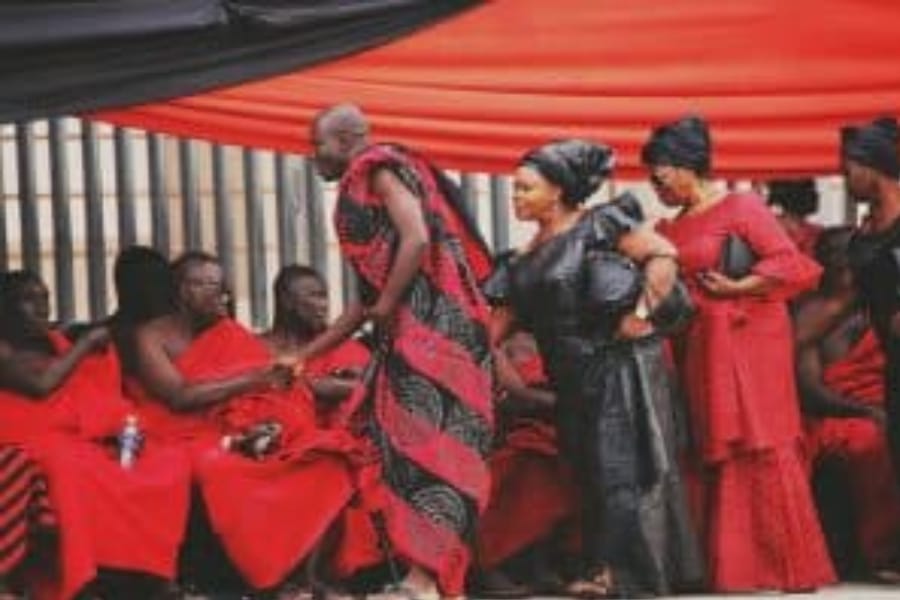 On the opposite to the Eastern cultures described above, Ghanaians wear red to funerals. This strong and deep colour represents grief and the feeling of loss among the family members. 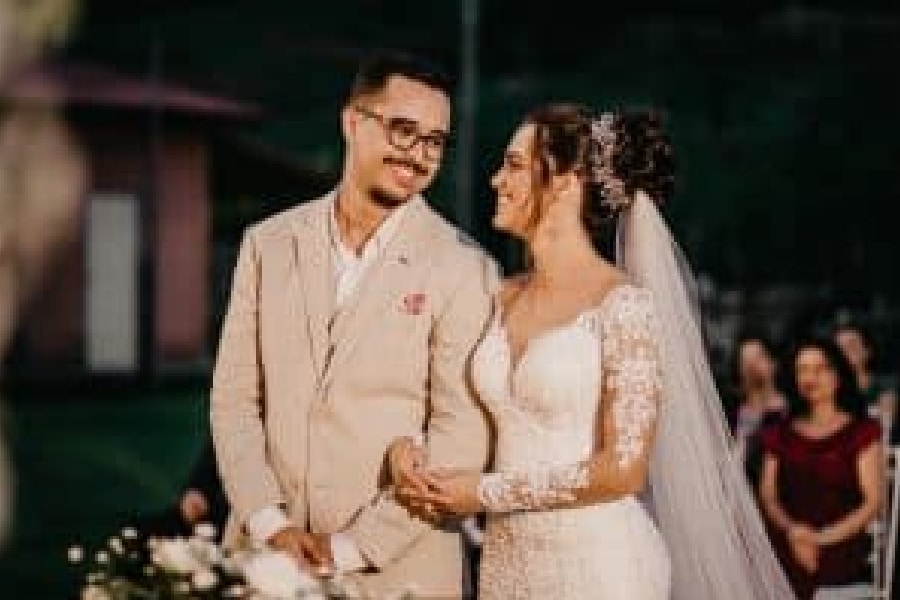 In the Western Christian tradition, white is the colour of purity and innocence. Hence the bride’s white wedding dress, white flowers and decorations. 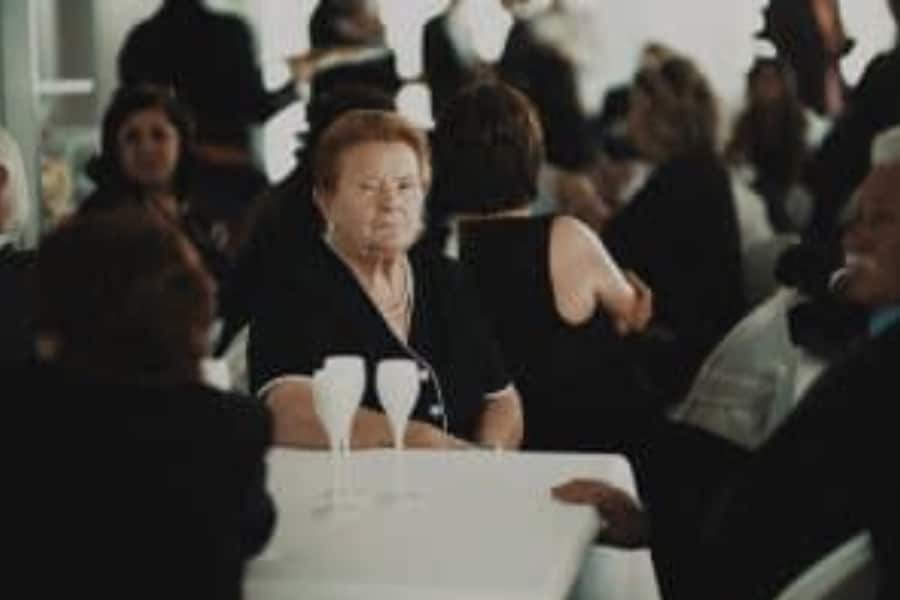 In most Western cultures, black is associated with grief, tragedy and mystery. The tradition dates back to Ancient Rome, where people would wear dark togas as a sign of mourning.

Why is this important to understand?

Now you know how different colour associations are used by people around the world. So, how do you apply this knowledge?

Know how to dress appropriately. Every culture still has its own traditions around colour, despite globalisation. By following the local customs, you’ll demonstrate respect and avoid feeling out of place in certain social situations.

Brand image and marketing rely heavily on colours. You need to predict how your colour choice will resonate across your international audience. The same colours will have a different effect depending on the location, and often evoke completely opposite emotions. To avoid negative associations, make sure to research your target audience – which culture groups they belong to, their behaviours, preferences and traditions.